Mumbai: Bollywood celebrities congratulated the cast and crew of the web series Delhi Crime. It won the ‘Best Drama Series’ award at the 48th International Emmy Awards. The awards were held virtually this year owing to the ongoing COVID-19 pandemic. Delhi Crime thus became the first Indian programme to win an International Emmy.

Actress Yami Gautam felt proud after learning about the win. She said: “Proud and congratulations to the team #DelhiCrime.” 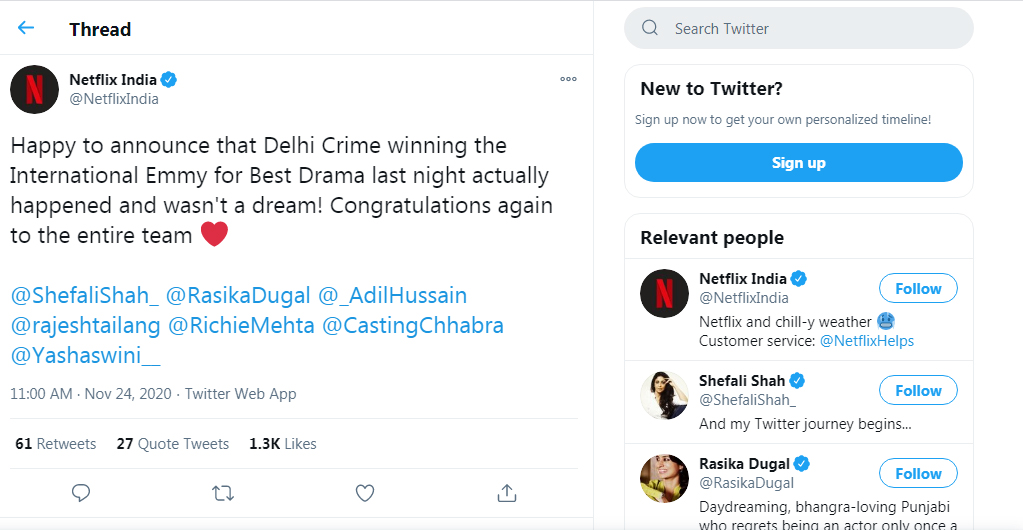 Aditi Rao Hydari was also not left far behind in congratulating the Delhi Crime team. She called the win ‘amazing’. “Amazing! Amazing! Amazing! Congratulations to the team of #DelhiCrime for their much deserved win at the #Emmys2020, can’t wait to see season 2!” Hydari tweeted.

On the other hand singer-composer Vishal Dadlani wrote: “Congratulations to everyone involved! Great show!”

The others who lauded the feat by Delhi Crime were Dia Mirza, Shamita Shetty and Neha Dhupia.

Shamita Shetty: Congratulations to the entire team of #DelhiCrime on winning an Emmy!!! Such a proud moment for us. 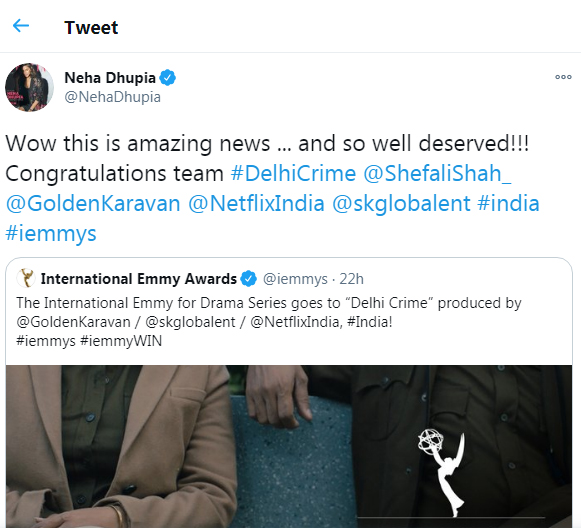 The news of the win was confirmed by the International Emmy Awards on its official page on Twitter. “The International Emmy for Drama Series goes to Delhi Crime produced by @GoldenKaravan / @skglobalent / @NetflixIndia,” tweeted @iemmys, with the tags #India!, #iemmys and #iemmyWIN.

Writer-director Richie Mehta’s seven-episode series has Shefali Shah in the central role of DCP Vartika Chaturvedi. It narrates the story of investigation in the aftermath of the heinous Delhi gang-rape of December 2012.