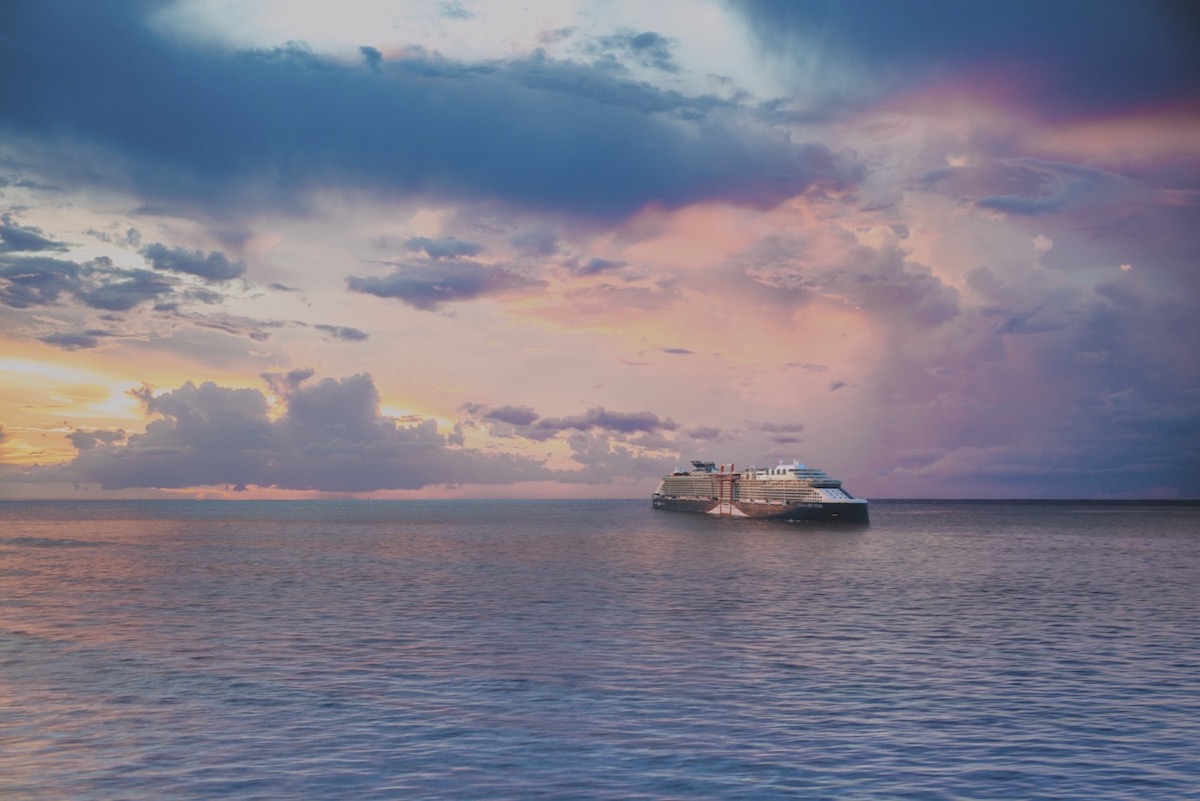 At 327m long and boasting 179 more suites and staterooms than her siblings, Celebrity Beyond is the latest ship to join Celebrity Cruises’ Edge class.

Beyond is the third ship to launch in the fleet, after Celebrity Edge and Celebrity Apex. On Beyond, outdoor spaces are expanded and new ones added. The dream team of celebrity architects and designers who worked on the first two ships in the Edge class has been re-engaged to work on her. Together with the length of the new boat and the breadth of experiences Beyond offers, these tastemakers and experts’ roles have been extended as well.

Celebrity Edge, the first of the Edge class ships, was launched in 2018. With her birth, parent company Celebrity Cruises turned a new chapter in epic sea travel. In order to bring Edge to life, Celebrity Cruises revolutionised traditional shipbuilding methods.

Mega cruise liners are usually held together by a solid hull. The exoskeleton of a ship is placed on the outside and seals the frame of the ship. However, in an Edge class ship, the spine is moved to the centre of the ship. This opens up the sides, allowing maximum light to reach the insides of the ship. It also frees up space around the ship, which Celebrity Cruises uses to create an unprecedented experience.

With this freeing up of space, staterooms are expanded right up to the ship’s edge. With a push of a button, the floor-to-ceiling windows of the staterooms in an Edge-class ship could retract like a garage door. Instead of a full-length window, all that now stands between your cabin and the vast ocean is a waist-high glass railing. Your entire living space is now an infinite veranda. Your seafaring experience has been brought right into your room. You can now hear waves lapping against the ship and smell sea brine without stepping out of your cabin.

With the balcony thus redefined, staterooms in Edge class ships are 23 per cent larger. As balconies help distribute the weight of a boat, bringing them indoors would require boat builders to redesign her support system so that the vessel is still seaworthy. To achieve this end without compromising on safety, Celebrity Cruises employs state-of-the-art 3D technology in design and engineering.

Doing away with traditional balconies and portholes is not all that Celebrity Cruises has done with the Edge class. Traditional tendering: the awkward experience where you have to board a small boat to get to a port – has been taken up a few notches on Edge class ships. Guests get on the Magic Carpet, a cantilevered deck the size of a tennis court. The Magic Carpet can move up and down the side of the ship and function as a tender or a dining patio. On it, you will find an open-air lounge, bar and seats – so that you can get to stay on for a drink and people-watch instead of getting into a tender – which is what many Edge guests do on a balmy evening.

Though designed to woo cruise virgins, Celebrity Edge has also won over many experienced cruisers including those with a passion for sleek interior design. One of the winning features can be seen on the pool deck in the form of two giant hot tubs designed like martini glasses.

Celebrity Apex, the second ship in the Edge class, has the same number of rooms and similar offerings. It also has The Retreat, an all- inclusive experience for suite passengers. Features include a private restaurant with an exclusive lounge. However, there are marked differences in F&B designs and experiences on the Apex. Just to name one difference – the Apex has the Craft Social, a bar that serves craft beers from around the world. It also has an additional theatre with the latest technology to enhance viewing pleasure.

Going above and beyond

Celebrity Beyond, the new kid in the fleet, will bear many similar open-air and outdoor features. But everything will be bigger. For example, Beyond’s main open deck is 40 per cent larger, and there are more rooftop dining spaces. Two cantilevered pools also dangle 2m over her sides. For Beyond, Celebrity Cruises has again partnered interior designers Kelly Hoppen and Nate Berkus, design firm Jouin Manku and WKK architect Tom Wright.

Berkus is reimagining the two-storey Sunset Bar while Hoppen is designing a Rooftop Garden that promises to bring guests even closer to the ocean. On Beyond, feted chef Daniel Boulud will open his first on-the- sea restaurant. Le Voyage promises a multi-sensorial dining experience that would transport guests to the places that inspired Boulud’s menu for Beyond. Goop guru and actress Gwyneth Paltrow is to be the ship’s well-being advisor, responsible for curating wellness experiences with the objective of bolstering individual and collective well-being.

Wellness is something that Celebrity Cruises takes so seriously that it is introducing the AquaClass Sky Suites to Beyond. AquaClass guests will have additional wellness perks such as the use of the Sea Thermal Suite (where they will find a hammam, a salt room, a steam room, a crystalarium and an infrared sauna). Staying in such a suite also entitles you to priority reservations at the spa, and complimentary fitness classes.

Passengers who are concerned about the environment and their own carbon footprint will be glad to know that Celebrity Cruises is at the forefront of green cruising. It has a slew of environmental stewardship practices that spans the use of renewable energy and water-reduction technologies, and various initiatives to make the ships more fuel-efficient.

Celebrity Beyond will take off for her maiden voyage on Apr 27, 2022, from Southampton, England. She will then sail around Western Europe in a 10-night cruise, calling at Bordeaux, Bilbao, Lisbon, Seville and Malaga. Barcelona will be her last stop. Thereafter, she will sail past the Mediterranean to reach New Jersey at end-October before heading for the Caribbean. Find out more about the ship and its itineraries at CelebrityCruises.com.

This story first appeared in the October 2021 issue of Prestige Singapore.