Washington: Their ‘bonhomie’ is well known across the world. They never let go of the chance to take potshots at each other. Well we are talking about the teen climate activist Greta Thunberg and about to be ‘future US President Donald Trump’. After being at the receiving end of Trump’s ire, Greta Thunberg has now got a chance to hit back.

Thunberg has clearly not forgotten how Trump took a potshot at her by asking her to ‘chill’. Now the tables are turning with Democrat Joe Biden slowly, but surely getting closer to the White House. Trump has alleged fraud during counting and that is when Thunberg has stepped in to settle an old score. .

“So ridiculous. Greta must work on her Anger Management problem, then go to a good old fashioned movie with a friend! Chill Greta, Chill!” Trump had written some time back as the two clashed on various opinions regarding climate change. Trump had tweeted these words December 12, 2019. 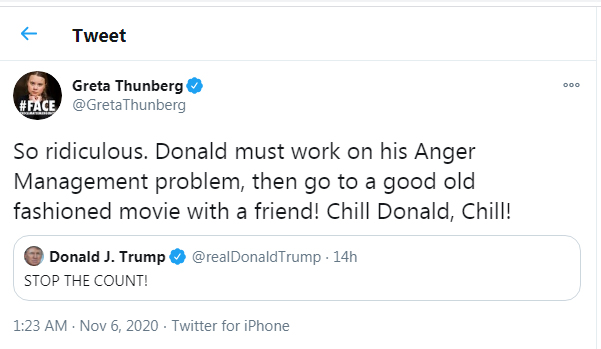 In less than 12 months, Thunberg has had the chance to hit back. Retweeting Trump’s post ‘STOP THE COUNT’, the Swedish green activist wrote, “So ridiculous. Donald must work on his Anger Management problem, then go to a good old fashioned movie with a friend! Chill Donald, Chill!” Greta too like Trump kept the ‘A’ and ‘M’ of ‘Anger Management’ in capital.

Greta had endorsed Joe Biden earlier and made it clear that her endorsement was for climate perspective as well. “I never engage in party politics. But the upcoming US elections are above and beyond all that. From a climate perspective it’s very far from enough and many of you of course supported other candidates. But, I mean…you know…damn! Just get organised and get everyone to vote Biden,” Thunberg had had tweeted.