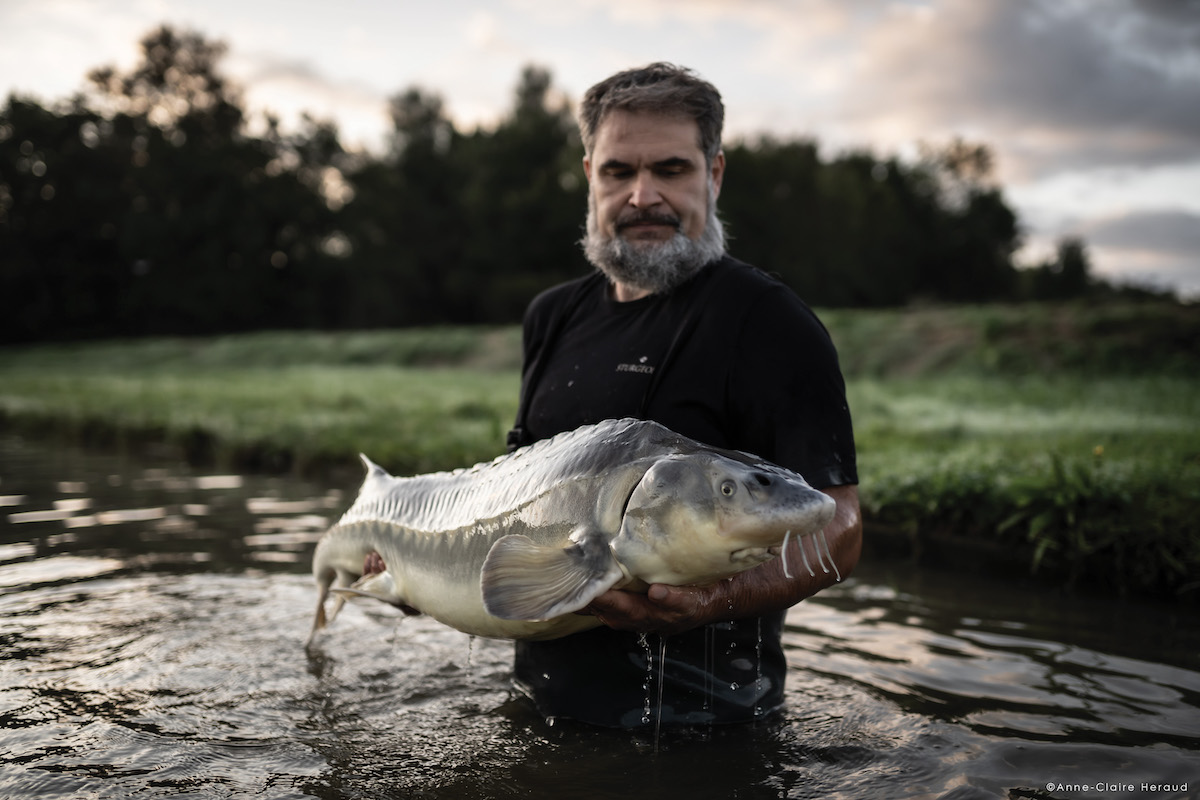 The image of caviar is changing. Annabel Tan finds out how the treasured delicacy can be sustainable and the different ways gourmands are enjoying it today.

For a long time, caviar has been considered a controversial yet highly coveted delicacy. While the salt-cured sturgeon roe is customary on the menus of top restaurants, it has also been associated with overfishing, illegal trade and other unethical practices that have driven most sturgeon species to the brink of extinction.

To protect the sturgeon population, a series of bans, quotas and trade embargoes over the years have made it illegal to harvest and sell wild caviar internationally. Today, most of the world’s caviar is farmed, with China being the leading producer and accounting for about 60 per cent of global production.

Like in many other industries, the issue of sustainability here is tricky. Farming may be the first step to a more ethical answer to fishing wild sturgeon, but it is also important to consider how the caviar is actually produced, from the way sturgeon is farmed to how the roe is harvested.

Cream of the crop

France has been a pioneer and major producer of farmed caviar even before the worldwide ban on wild sturgeon caviar trade in 2006. The region of Aquitaine, located just west of Bordeaux, has been producing caviar since the 1920s, when a Russian princess noticed on her visit that the local sturgeon were not being harvested for caviar and remarked how valuable the delicacy was. Now home to about six of the eight French caviar producers, Aquitaine accounts for most of the country’s caviar and produces almost 24 tonnes a year.

About half of this comes from Sturgeon, a company founded 20 years ago and recognised as a pioneer in sturgeon-breeding in France as it has worked on the reintroduction of farmed sturgeons years before the ban. Its flagship brand Sturia prides itself on exceptional quality caviar made with strict and sustainable processes.

Nicolas Proust, the fish production manager at Sturia, has been with the company since 2001 and heads a team responsible for the sturgeon’s entire existence from birth in Sturia’s hatchery to maturity. Having always been fascinated by the aquatic world since he was a boy, Proust studied aquaculture production and did related internships in France and abroad. He took particular interest in sturgeon breeding and has been working with the species for over 20 years now.

While the number of sturgeon farms are growing, Proust says the number of sustainable ones are not rising proportionately due to varying regulations across countries and companies that prioritise profit and quantity over quality.

“Unbelievable patience and passion are required to breed sturgeons,” says the 48-year-old, who runs us through the painstaking process. It takes three years before it is possible to determine a sturgeon’s sex through ultrasound, an innovative method first developed by Sturia in the late ’90s. At least another four years are required to allow the sturgeon to grow and reach maturity.

Ultrasound scans help to establish the optimal time to fish and harvest the eggs, while a biopsy helps to assess the quality of the eggs. If the eggs meet Sturia’s stringent quality specifications such as size and firmness, the female sturgeons are then transferred to a rinsing pond with fresh water and fasted for a few days to expel any parasitic flavours that occur in these bottom feeders. The whole process takes up to seven to 10 years before the roe is finally harvested.

When it comes to harvesting caviar, there are generally two approaches: the classic method and the “no-kill” method. The classic method involves killing the fish after harvesting the roe, whereas the latter extracts the caviar while keeping the fish alive either by c-section or milking the eggs out. While the no-kill process might appear to be more ethical, there are several reasons why many caviar producers including Sturia choose to stick to the classic way.

The biggest issue with the no-kill method is maintaining the flavour and texture of the caviar. On top of that, the fish have to either be injected with hormones and chemicals to induce labour, which can turn up in the final product; or undergo a C-section, which can cause infertility and infections in the fish.

“Sacrificing the sturgeon traditionally is the only way to have natural caviar,” maintains Proust. “We do not endorse the use of hormones and chemical products or treatments, nor the repetitive cruelty in some cases where the fish abdomens are sliced open and sewed back multiple times since female sturgeons can produce eggs ever two years. That is not animal welfare but profit.”

In order to be as ethical and sustainable as possible, Sturia not only harvests caviar from the sturgeon but also utilises the rest of the fish – the meat is sold for consumption and is well appreciated in Eastern Europe. Its skin can be turned into leather and the cartilage is made into fish glue, which can be used to restore art pieces and musical instruments.

“Fish breeding not only prevents the running down of natural reserves but also enables us to gain knowledge that is valuable to wild species,” adds Proust. “At Sturia, we share this knowledge, know-how and resources with others, and we also participate in the backing and reintroduction of sturgeon species into the wild.”

Sturia currently has a range of 11 products, including the first- ever French Beluga caviar – a real fruit of labour as the roe can only be harvested when the sturgeon reaches a maturity of 15 years. Other bestsellers include Vintage caviar, from the Acipenser Baerii sturgeon; Oscietra caviar, from the Acipenser Gueldenstaedtii sturgeon; and Prestige Oscietre, which is often selected by chefs for its large size.

While sustainable caviar is still a niche for now, there are other producers that operate with similarly high standards. Paris-based Kaviari is another French producer with an international reputation for the finest farmed caviar produced sustainably, while Calvisius Caviar in Brescia, Italy, also prides itself on guiding principles of quality, craftsmanship and sustainability. Closer to home, Singaporean brand Caviar Colony ensures its farms in Yunnan, China, follow responsible processes and also sells sturgeon bi-products to nearby farms as sturgeon meat is a popular source of protein among locals.

While diners in Singapore are not yet demanding eco-conscious caviar like sustainable meat and seafood, many top restaurants are operating more sustainably and opting for such responsible produce nonetheless. The two-Michelin-starred JAAN by Kirk Westaway serves Kaviari caviar in several dishes.

“Sustainability is very close to the heart of what JAAN does and how we operate,” says executive chef Kirk Westaway. He personally sources sustainable produce from accredited suppliers and artisanal producers all over the world so that everything is accounted for – from where the ingredient originates to how it arrives at the restaurant. While it is an environmentally responsible choice, Westaway also believes sustainably farmed caviar tends to be more consistent in flavour and colour given the controlled conditions in which the sturgeons are kept.

He has visited Kaviari’s headquarters in Paris where he learnt first- hand about the distinctive profiles of its caviar range and broadened his understanding of its production. Supporting Kaviari’s sustainable methods and quality produce, Westaway has maintained a relationship with the brand for five years now.

“I am an ardent fan of Kaviari caviar as it offers a consistency in quality, flavour, shape and texture. It boasts a subtle nutty taste on the palate, and the right balance of saltiness and creaminess that is absolutely sublime,” says the Briton.

“These precious gems also come in a beautiful emerald green that glistens under daylight, making it the perfect finishing touch that elevates the flavours and aesthetics of my culinary creations. Furthermore, the delicate Kaviari beads remain intact even when scooped with a spoon, so guests can enjoy its melt-in-the-mouth texture and explosion of flavour when savoured.”

Similarly, resident chef Denis Lucchi of one-Michelin-starred Italian restaurant Buona Terra chooses to use Calvisius caviar for the company’s sustainable and ethical processes. “Also, the quality it delivers and the fact that its products bear the hallmark of Italian excellence, considering that we are an Italian restaurant,” says Lucchi, who grew up close to the Calvisius farm in Brescia and visits it annually on his summer holidays. Buona Terra uses Calvisius caviar in many ways from canapés to entrées, and as the spotlight in a main dish.

“This depends on what kind of caviar we are using and the seasonal ingredients,” adds Lucchi. “Chefs today are also pushing our boundaries of creativity by constantly experimenting on new flavour combinations with the different types of caviar that are now available.”
For chefs like Lucchi and Westaway, the use of caviar in the fine dining scene has evolved from being served simply with blinis and champagne to a more versatile ingredient. “I use Kaviari Kristal caviar as a finishing touch to elevate the taste and aesthetics of my dishes, and as an accompaniment to balance richness,” says Westaway.

“For example, caviar is used to accentuate the mild, nutty flavour of our signature Hen’s Egg, a refined take on British eggs and soldier featuring Berkswell cheese. It also matches the creaminess and saltiness of our Irish Oysters from Donegal. The versatility enhances creative possibilities and the end result in each is simply amazing.”

The same sentiments are shared by chefs across restaurants of various cuisines. Passionate about sustainability, chef-owner Drew Nocente at contemporary Australian restaurant Salted & Hung adopts a minimal wastage philosophy in his cooking. He showcases Caviar Colony caviar as a main ingredient in his Fish and Chips dish, which features a crispy chip made from turbot skin that complements the briny morsels.

At Restaurant Gaig Singapore, the first international outpost of the Michelin-starred restaurant in Barcelona, executive chef Martí Carlos Martinez has been serving Sturia caviar in his Catalan food for about five years. During the white asparagus season, he combines caviar with reduced cream atop steamed asparagus.

Chef-founder Louis Han of NAE:UM uses Kaviari in his contemporary Seoul cuisine for its variety of responsibly sourced quality caviar. “Caviar has a distinctive umami flavour and creaminess that help to elevate a dish. Due to its versatility, it can be easily matched with different dishes,” says Han, who serves it in his signature Uni Somyeon, inspired by the cold noodles his mother often prepared. It comprises Korean-made buckwheat noodles tossed in a dressing of white kimchi, chives and truffle oil, topped with Bafun uni. Diners have the option to add Kaviari Oscietra caviar for a touch of decadence and savouriness.

This story first appeared in the October 2021 issue of Prestige Singapore.

The post How sustainable caviar is produced and consumed appeared first on Prestige Online – Singapore.