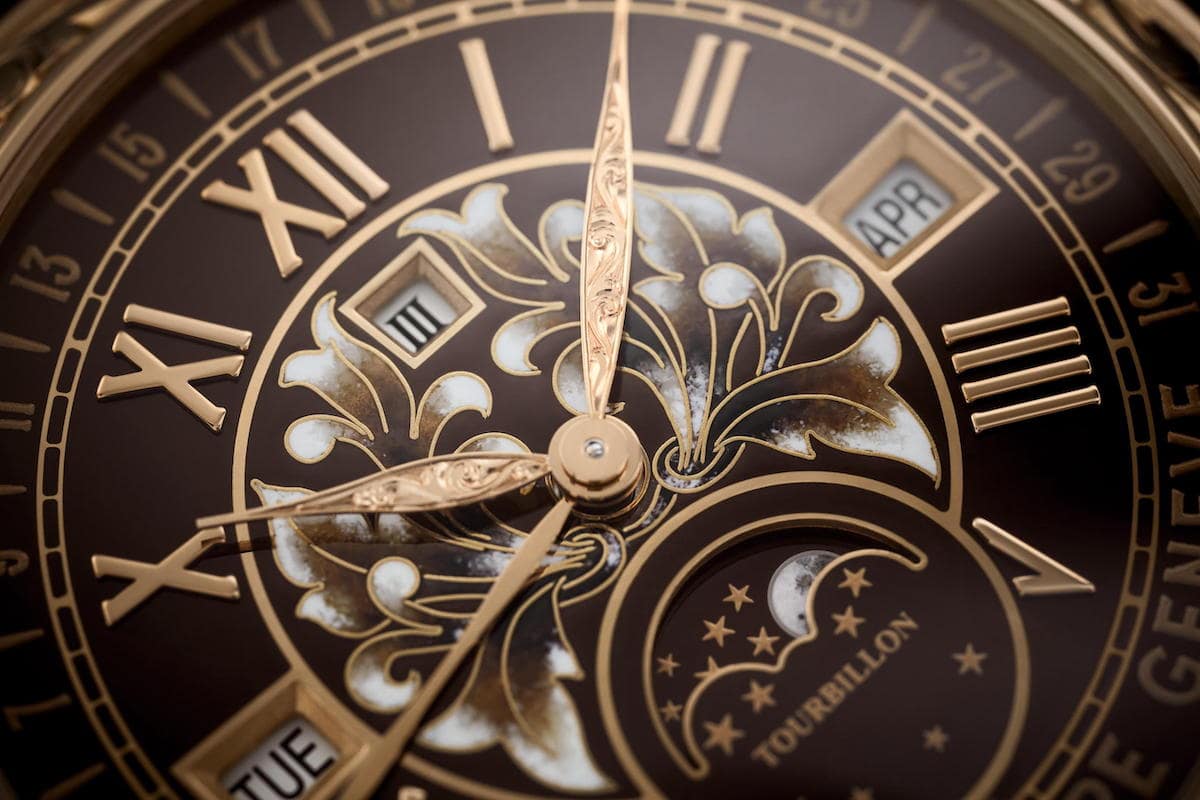 Held earlier in June at Patek Philippe’s historic Genevan headquarters on Rue du Rhône, the Rare Handcrafts 2020-2021 exhibition was a rich showcase with an extensive selection of over 75 pocket watches, wristwatches as well as dome and table clocks from the manufacture’s latest rare handcrafts collection. The remarkable one-of-a-kind and limited-edition timekeepers paid tribute to challenging craftsmanship and esteemed, traditional watchmaking techniques.

Patek Philippe’s first double-faced wristwatch launched two decades ago, the Ref. 5002 Sky Moon Tourbillon is the manufacture’s second most complicated wristwatch after the Grandmaster Chime, and also one of the most coveted grand complications among collectors and connoisseurs.

From 2013 to 2016, the double-faced watch, sporting a lavish white gold case with blue enamel dial, was was offered in a Rare Handcrafts version, Ref. 6002G-010. Replacing its 2016 predecessor – the Ref. 6002G-010 with a black enamel dial – is the updated and equally ornate Ref. 6002R-001 Sky Moon Tourbillon Haut Artisanat, which boasts a new face combining the warm shimmer of rose gold with brown grand feu enamel decoration.

The circumference of the dial, moonphase aperture and the moon on the rotating disc are executed in grand feu champlevé enamelling. This intricate, age-old craft requires the base metal to be precisely milled out by hand, while individual elements such as the minute scale, remain in relief. Next, these carved-out recesses are manually filled with enamel compound before the firing process.

The centre of the dial features an opulent grand feu cloisonné enamel décor that has been painstakingly traced with thin flat gold thread. The case, crowns, repeater slide piece, leaf-shaped hands as well as the foldover clasp are manually engraved with a motif of volutes manually engraved with a motif of volutes and arabesques on all sides– a laborious effort which took a master engraver over 100 hours to complete.

The commanding 44mm Sky Moon Tourbillon houses 12 fascinating complications. These include a tourbillon, and a minute repeater that strikes on cathedral gongs. The front dial shows a perpetual calendar with a retrograde date hand, moonphase display and the leap year cycle. Its reverse side reveals a celestial chart that reproduces the visible motion of the moon and stars in the Northern Hemisphere. The two hands on this face show sidereal time, which is the time taken for a given star to return to the same point in the sky. Patek Philippe created a complex system of three superimposed discs that move in different, precisely calculated trajectories to orchestrate this grand heavenly ballet.

Featuring the manually wound Calibre R TO 27 QR SID LU CL, the Sky Moon Tourbillon is paired with a chestnut patinated alligator leather strap and is delivered with a pair of rose gold cufflinks graced with hand-engraved outer rings and Calatrava cross motifs in the centre.

The enduring colour and timeless sheen of the dial make a striking backdrop for the faceted, lancet-shaped white gold hour and minute hands that sweep over printed hand-shaped gold markers and a subsidiary seconds dial discreetly positioned at 6 o’clock.

Adding a dazzling touch to the bezel are 168 flawless Top Wesselton brilliant-cut diamonds set in two staggered rows using the Flamme technique. A Patek Philippe-registered trademark for the horological industry, the exclusive and patented gem-setting method requires the artisan to cut grooves in the gold between each stone with a sharp burin to allow light to illuminate the diamonds from below, as well as impart a light, airy touch to the timepiece.

The self-winding Calibre R 27 PS is powered by a 22k gold eccentric mini-rotor recessed in the movement. Not only does it stand out with its very svelte 5.05mm profile – endowing the case its elegance – but also with the harmonious sound of its two classical gongs. The architecture and lavish finishing can be admired via the sapphire-crystal caseback, which is interchangeable with a solid white gold caseback that comes with the watch. The elegant timepiece is presented with an alligator strap in patinated ocean blue with a white gold prong buckle bedecked with 26 brilliant-cut diamonds.

In 2018, Patek Philippe presented a limited series of 100 sets comprising a platinum timepiece and matchingcufflinks in honour of rare handcrafts and to mark the Golden Ellipse collection’s 50th anniversary. The manufacture enriches the current line with an impossibly elegant and sophisticated iteration of the watch – Ref. 5738/51G-001 Golden Ellipse Haut Artisanat – dressed in a polished white gold case and boasting subtly reworked dial decor details.

For this watch, the maison combines two of the oldest, most revered techniques employed to embellish timepieces – hand engraving and champlevé enamel. The 18k gold dial plate is first hollowed out to form cavities that will be filled with grand feu champlevé black enamel. The raised gold areas are then hand-engraved with a stunning decor of arabesques and volutes that complements the distinctive shape of the Golden Ellipse.

It also further highlights the perfectly balanced proportions of the 34.5mm by 39.5mm case that are inspired by the “golden section”. Also known as the “divine proportion”, it is the foundation for some of humanity’s greatest architectural creations. Slender white gold “cheveu”-style hands indicate the time, while the crown is finished with anonyx cabochon.

The ultra-thin self-winding Calibre 240 with a 48-hour power reserve ticks beneath the artistically crafted dial. Powered by an off-centre recessed 22k-gold mini-rotor, it fits a 6.58mm case courtesy of its ultra-thin design. The timeless style of the new model is accented by a shiny hand-stitched black alligator leather strap with a white gold prong buckle mirroring the shape of the case.