Showcasing the boundless creativity of Spanish-born photographer Eugenio Recuenco, the travelling art exhibition 365° arrives in Bangkok for a three-month run. Prestige takes a closer look at this year in review… one day at a time.

In 2018, when acclaimed photographer Eugenio Recuenco finally completed his 365° project, he was 50 years old. The title of the project, which he had begun eight years earlier, derives from the fact that there were to be 365 images in the series, each corresponding to a different day of the calendar year.

Taken as a whole, these elaborately staged art photos are like an impressionistic chronicle of the first five decades of Eugenio’s own life, as each one somehow corresponds to a situation, remembrance, fascination, or historic event that is of some significance to the artist. However, on another level, these arresting images can be viewed as a fantastic exercise in pure creativity, as each is entirely unique despite having the same dimensions (110 x 132 cm), an identical camera position and, most noticeably, a shared backdrop; a three-walled, one-windowed cubicle that truly forced the photographer to “think outside the box”.

“It was very difficult decision to make,” admits Eugenio as we begin our virtual interview – he in his hometown of Madrid, and me in Bangkok. Of course, he can’t help but laugh when he reflects on the absurdity of creating a photo series with such a rigid set of self-imposed guidelines. “As a photographer, it was the moment in which I lost my freedom, deciding this is the position of the camera, and this is the set.”

Thankfully, the freedom to take his mind where it wanted to go was left unhindered, and that’s what’s most striking about this eye-popping collection. The sheer scope of these “variations on a theme” is awe-inspiring, as this tiny cell transforms into everything from a swimming pool, to a railway crossing, to a recreation of the baby carriage scene from Sergei Eisenstein’s film Battleship Potemkin. The mammoth cast of characters also boggles the mind – a total of 120 models took part in the project from start to finish – and then there’s the team of 300 production staff, whose efforts can only be appreciated after viewing the entire exhibition.

“We needed a lot of people for construction, plus make-up artists and stylists, and people to make the clothes,” Eugenio says. “It was a big, big team.”

Physically incorporating the month and date into each image was another artistic hurdle the photographer set for himself, and while most photos in 365° include a dated piece of paper from one of those old-school, tear-off wall calendars, a few have their calendar clue more cleverly concealed within the composition (in one instance as the sails on a tiny model ship).

In many photos, the month and date is quite relevant to what’s going on within in the frame, but not always (which is why downloading the PDF catalogue by QR code while at the show is recommended). Some pictures are deeply personal and poetic, such as the one commemorating the birth of Eugenio’s daughter (November 1), while others are much more universal and easy to decipher, such as the September 11 image alluding to the 9/11 attacks, or the one dated May 6, referencing the Hindenburg disaster. Then there are some that are just pure whimsy, like the beautiful woman reimagined as a confused jack-in-the-box. But if there’s one thing these photos all have in common, it’s that
they’re simply gorgeous to look at!

As a professional photographer, Eugenio has made a considerable name for himself working for magazines such as Vogue, Vanity Fair, and GQ , and prestige brands like Boucheron, Nina Ricci, Diesel, and Yves Saint Laurent. He even directed an award-winning short film advertisement for the fashion house Loewe. And while the abundance of leggy female models in 365° is no doubt a holdover from his fashion world background, his core sense of aesthetics seems to be most influenced by the world of cinema and, perhaps more overtly, by classic and contemporary paintings.

“Before becoming a photographer I studied fine art,” he explains. “Painting has always been very important in my life. It’s a part of me. I find standing in front of a painting, you can read so much into the work.”

The use of dramatic lighting, theatrical make-up, and textured backgrounds actually make the images in 365° look more like paintings than photographs, and so it makes sense that many reference famous painters, including Goya, Mondrian, Rene Magritte, Edward Hopper, and even Banksy. One work I’m particularly drawn to is the homage to Salvador Dali – dated May 11, Dali’s birthday – which features a staged recreation of Figure at the Window, one of the famed surrealist’s more sedate works (and one of my personal favourites). Eugenio tells me how here he attempted “to try and break the space” by creating a window where no window exists. In another work – dated July 29 – the death of Vincent Van Gogh is commemorated with the set being transformed into the painter’s famous Bedroom in Arles, complete with a very convincing Van Gogh lookalike model staring back at the viewer. 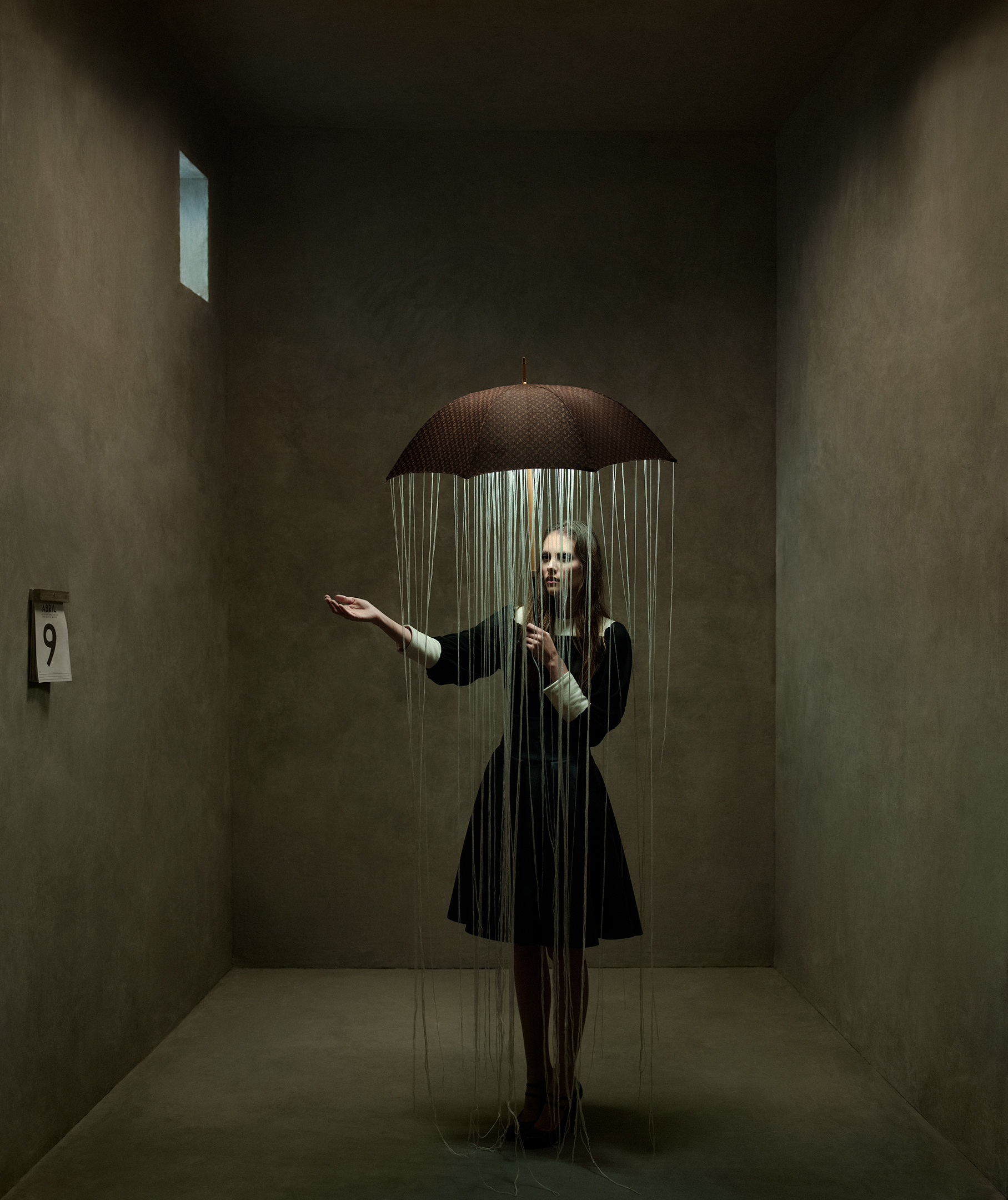 In 2018, the exhibition had its premiere in Madrid, and since that time it has travelled to Barcelona, London, Valencia, Shanghai, and Taipei. It arrived in Bangkok in mid-May, and will be on display in the 2nd floor main gallery at River City Bangkok until August 15. The installation is huge, so visitors pass through several low-lit rooms in which the walls are almost entirely covered by the more than 360 lightboxes (photos printed on canvas, stretched onto frames, and illuminated from behind) on display.

The exhibit also includes an introductory video illustrating the inspiration behind many of the images, but more exciting are the 11 life-size, fully interactive recreations of sets from the series. Clearly organisers had the selfie generation in mind when they came up with this gimmick, but the truth is that putting yourself “into the art” also gives some insight into Eugenio’s creative process. In fact, you really see just how inventively low-tech some of these backdrops are.

“One of the reasons we spent eight years doing this is because all the things you see in these pictures are real,” he says. “I use a digital camera, but the way we are doing things is very analogue. I enjoy that process. I only use Photoshop for correcting the colour.”

To create these mind-boggling visuals, Eugenio uses every trick in the photographer’s handbook: from forced perspective and miniaturised sets, to complex optical illusions created using the trompe-l’œil technique. Of course, the heart and soul of the show will always be the narratives behind the visuals, and here Eugenio Recuenco reveals himself to be a master storyteller – vacillating between cynical and optimistic, but almost always adding a touch of humour. Interestingly, one of the original inspirations for the series was world travel, but in 2021 he reveals a new interpretation has emerged.

“When Spain was in its confinement [lockdown] period, these boxes, for me, became a vision of the confinement, displaying all of us inside our homes. And for me, in that moment, the exhibit took on a new significance.”

Before we end our chat I point out that most visitors to the show will want to see which image corresponds to their birthday, and so naturally I’m curious what Eugenio created to mark his own date of birth.

“I am in this project too,” he chuckles, “as the 8th of May, my birthday, has me in the picture. It’s the only one where the character is outside of the box. I’m made up to look like the figure in an El Greco painting, but if you look closely you see he is carrying a camera.”

After it’s run in Bangkok, 365° is scheduled to travel to Mexico. As for Eugenio, who can’t accompany his photos on their world tour, he’s busy at home working on a new “crazy project” – as he calls it – formidably entitled ‘1001 Nights’. Clearly, this is not a man who’s daunted by a challenge.

The post Take a tour through the Lightbox Exhibition 365° by Eugenio Recuenco appeared first on Prestige Online – Singapore.