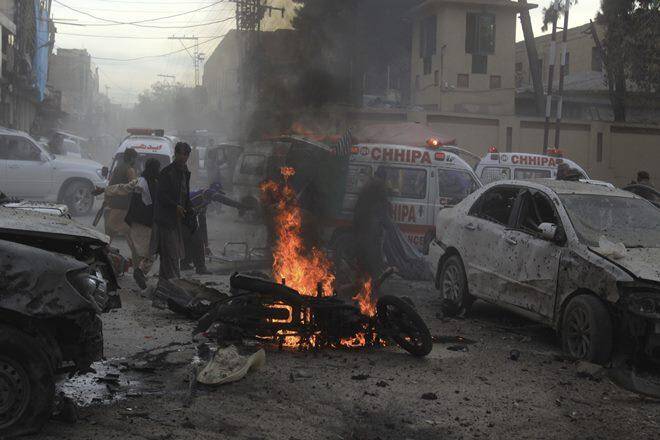 Islamabad: A powerful bomb targeting an anti-drug force Monday ripped through a market in a restive Pakistani town bordering Afghanistan, killing at least five people and injured 20 others. The blast occurred at the Haji Nida market of Chaman town in the volatile Balochistan province, according to police.

At least five people were killed and 20 were injured in the blast, ‘Dawn’ newspaper quoted assistant commissioner Zakaullah Durrani as saying. The report also said toll may rise as a number of the injured are ‘serious’.  The wounded have been shifted to the Civil Hospital. No group claimed responsibility for the attack.

According to police inspector Muhammad Mohsin, unidentified miscreants had planted an improvised explosive device in a motorbike that was parked on the roadside. Durrani said that the explosion targetted a vehicle of the Anti-Narcotics Force. Window panes of several shops and houses in the vicinity were shattered due to the impact of the explosion.

Prime Minister Imran Khan, in a statement posted on the PM Office’s Twitter account, condemned the incident and expressed grief for the lives lost.

Militants and separatists belonging to the banned outfits have stepped up terror attacks in Balochistan in recent weeks.

At least one person was killed and six others were injured after an explosion July 21 in Turbat bazaar. Earlier in May, seven soldiers, including a junior commissioned officer, were killed in a bomb blast and an exchange of fire with militants.

In April, two Pakistan Army soldiers were killed and two others injured in a bomb blast that took place in Toba Achakzai area of Qila Abdullah, a district bordering Afghanistan.