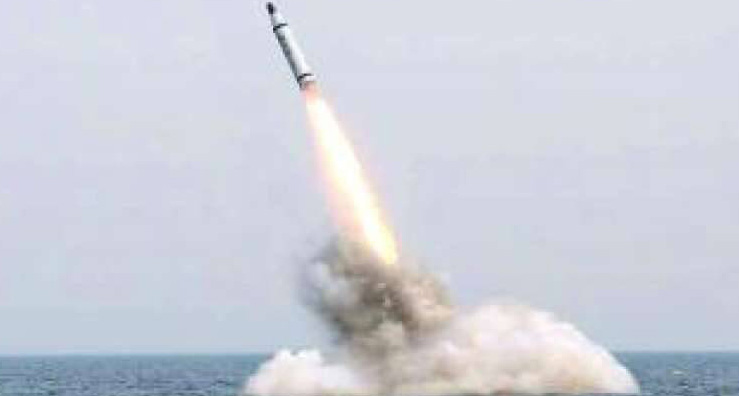 Beijing:  For the first time, China has fired its ‘aircraft-carrier killer’ missile into the South China Sea as part of the naval drills being carried out by the military in the disputed region amid aerial reconnaissance by US spy planes.

China is engaged in hotly contested territorial disputes in the South and East China Seas. Beijing has also made substantial progress in militarising its man-made islands in the past few years, which it says it has the right to defend.

China launched two missiles, including an ‘aircraft-carrier killer’, into the South China Sea (SCS) Wednesday morning, a day after US U-2 spy plane entered a no-fly zone during a Chinese live-fire naval drill in the Bohai Sea off its north coast, Hong Kong-based South China Morning Post reported Thursday.

One of the missiles, a DF-26B, was launched from the north-western province of Qinghai, while the other, a DF-21D, (aircraft-carrier killer missile) lifted off from Zhejiang province in the east.

Both were fired into an area between Hainan province and the Paracel Islands, the Post quoted Chinese military sources as saying.

Paracel Islands fall in the disputed part of the South China Sea.

The DF-26 dual-capable missile is a type of weapon banned by the Intermediate-Range Nuclear Forces Treaty signed by the US and Soviet Union towards the end of the Cold War.

When the US withdrew from the treaty last year, it cited China’s deployment of such weapons as justification, the report said.

The DF-26 has a range of 4,000 kilometres and can be used in nuclear or conventional strikes against ground and naval targets.

The DF-21 has a range of around 1,800 kilometres, with the state media describing it the most advanced in the series, and the DF-21D, as the world’s first anti-ship ballistic missile.

The missile launch was aimed at improving China’s ability to deny other forces access to the South China Sea, the report quoted sources as saying.

“This is China’s response to the potential risks brought by the increasingly frequent incoming US warplanes and military vessels in the South China Sea. China doesn’t want the neighbouring countries to misunderstand Beijing’s goals,” the report said.

Asked for his comment on the missile launches at an online media briefing, Chinese Defence spokesman Sr. Col Wu Qian said China will not dance to the US tune or tolerate its reckless provocations.

Wu slammed the recent US provocations in the South China Sea, stressing China is not afraid of such actions, state-run CGTN TV reported.

Besides sending the spy planes to the area of People’s Liberation Army (PLA) drills, the US added 24 Chinese companies to the Entity List on Wednesday for their role in China’s construction works in the South China Sea. China refuted the US accusations, terming the sanctions unjust.

Wu said the Chinese armed forces will take forceful measures to protect the sovereignty, security and development interests of the country and safeguard world and regional peace.

“We advise some US politicians to recognise the realities, remain rational and stop provocation, so as to push the bilateral military relations back to the right track,” Wu said.

China lodged a diplomatic protest with the US on Wednesday objecting a second spy plane, specialising in gathering data on missile launches “intruded” into its “no-fly zone”, snooping over the ongoing military exercises by the People’s Liberation Army (PLA) in the disputed South China Sea.

The US is increasing the frequency of its close-up reconnaissance of the PLA drills in order to pry about its capabilities, which is provocative, brings the risk of accidents, and could lead to escalation, Chinese experts told the state-run Global Times.

The US, which is piling up pressure on China on trade and diplomatic fronts during the past few months, also stepped up air and naval patrols in the South China Sea where USS Nimitz and USS Ronald Reagan Carrier Strike Groups conducted a dual-carrier operation in the area last month in a show of strength.

Song Zhongping, a Hong Kong-based military commentator, said the missile launches were clearly meant to send a signal to the US.

“The US continues to test China’s bottom line in Taiwan and South China Sea issues, and this pushed China to showcase its military strength to let Washington know that even US aircraft carriers cannot flex their full muscle near China’s coast,” Song told the Post.