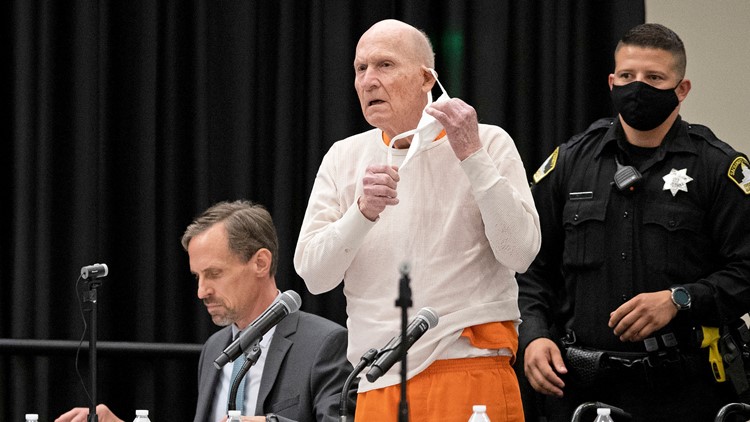 Sacramento (US): Just before receiving multiple consecutive life sentences, Joseph James DeAngelo, the former California police officer who lived a double life as the murderous sociopath dubbed the Golden State Killer, broke his silence to tell a hushed courtroom filled with victims and their family members that he was ‘truly sorry’ for the crimes.

It was such an unexpected moment that it brought gasps from those in the gallery, many of whom sat through an extraordinary four-day sentencing hearing filled with graphic and heart-wrenching testimony from dozens of victims.

It also reinforced that nobody ever seemed to know what DeAngelo would do and who he was, which helps explain how he eluded detection for four decades while committing at least 13 killings and dozens of rapes.

The 74-year-old DeAngelo spoke for only a few seconds after rising from a wheelchair that newly released jail video shows he doesn’t need.

“I listened to all your statements, each one of them, and I’m truly sorry for everyone I’ve hurt,” he said, putting aside the weak, quavering voice he used to plead guilty and also admit to multiple other sexual assaults for which the statute of limitations had expired.

Prosecutors and victims said it was more evidence of a manipulative and vicious criminal who fooled investigators and his own family until he finally admitted victimising at least 87 people at 53 separate crime scenes spanning 11 California counties.

He was finally unmasked in 2018 with a pioneering use of DNA tracing.

“I think that he is truly diabolical and he is constantly masked, whether it’s a physical mask, a disguise in the voice, the role of a decent guy in the community and having people around him who love him,” said Debbi Domingo McMullan?, the daughter of murder victim Cheri Domingo.

“One hundred percent ‘Jekyll & Hyde,’” added Jane Carson-Sandler, one of DeAngelo’s first rape victims. “It’s like he was living two completely different lives. … He probably, somehow in his mind, didn’t feel that he was committing these crimes — it was someone else, almost compartmentalised.”

DeAngelo’s family members broke their silence in the case, writing in letters read to the judge that the ‘monster’, ‘devil’, ‘beast’ and ‘madman’ described by prosecutors is the polar opposite of the man that one niece saw as a loving father figure and another as her ‘hero’ who took her camping and fishing.

Sacramento County Superior Court Judge Michael Bowman was unmoved. He said DeAngelo should die in prison with ‘no mercy’ from his jailers after pleading guilty in June to 13 murders and 13 rape-related charges that spanned much of California between 1975 and 1986. The plea deal spared him the death penalty.

“When a person commits monstrous acts, they need to be locked away so they can never harm an innocent person,” the judge said to applause from DeAngelo’s victims.

Investigators in the case pioneered a new method of DNA tracing that involves building a family tree from publicly accessible genealogy websites to narrow the list of suspects.

They linked nearly 40-year-old DNA from crime scenes to a distant relative of DeAngelo and eventually to a discarded tissue they surreptitiously lifted from DeAngelo’s garbage can in suburban Sacramento.

The same technique has since been used to solve 93 murders and rapes across the nation, said Ron Harrington, whose family has been obsessed with solving the 1980 slayings of youngest brother Keith Harrington and his new wife, Patrice Harrington.

It led oldest brother Bruce Harrington to champion a ballot measure passed by California voters in 2004 that expanded the collection of DNA samples from prisoners and those arrested for felonies and has since led to more than 81,000 identifications.

Bowman told DeAngelo he was moved by the courage and strength of the victims and their family members — ‘all qualities you clearly lack’ — who told how they endured sadistic, hours-long assaults.

DeAngelo’s rapes and eventual murders followed the same pattern of binding couples he surprised while they slept and assaulting the woman as the man lay helpless. He would place dishes on the man’s back, warning that he would kill them both if the dishes rattled.

DeAngelo’s relatives said that conflicted with their image of the man they loved.

“I personally feel that someone else is inside him who I do not know,” a niece said in a letter read by defense attorneys.

DeAngelo’s sister and a close friend each wrote that he was abused as a boy by an emotionally distant, disciplinarian father.

Prosecutors said they had found no evidence of abuse, but Sacramento County District Attorney Anne Marie Schubert said they learned he was a teenager “who was blowing up animals, who was breaking into homes.”

His ex-wife, Sacramento attorney Sharon Huddle, said in her own court filing that she was fooled by his excuses of working nights, leaving for pheasant hunts and visiting his parents, though many victims have wondered aloud how she could not have known of her husband’s double life.

“No compassion, no empathy, no remorse,” Schubert said. “He has and always will be a sociopath in action.” Former fiance Bonnie Colwell Ueltzen said, “I didn’t see a criminal in him, but I know now he was a burglar and a Peeping Tom before I ever knew him.” She broke off their teenage engagement when DeAngelo became abusive.