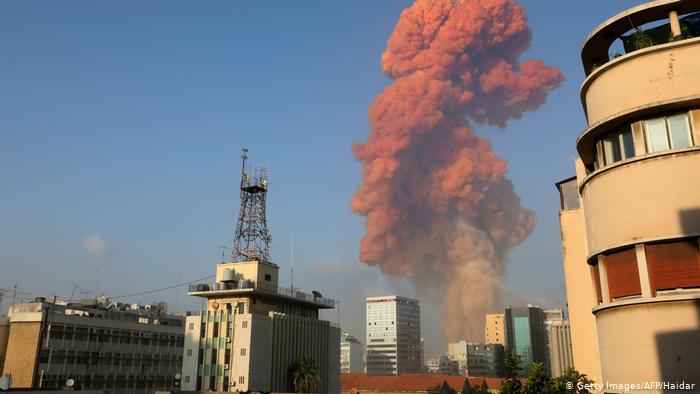 Beirut: A massive explosion shook the Lebanon capital of Beirut Tuesday wounding a number people and causing widespread damage. The afternoon blast shook several parts of the capital and thick smoke billowed from the city centre. Residents reported windows being blown out and a false ceilings dropping.

The explosion appeared to be centred around the port here and caused wide scale destruction and shattered windows miles away.

An Associated Press photographer near the port witnessed people wounded on the ground and widespread destruction in central Beirut. Some local TV stations reported the blast was at Beirut’s port inside an area where firecrackers were stored.

Lebanese media carried images of people trapped under rubble, many bloodied, after the massive blasts in the port area, the cause of which was not immediately known. The explosions ‘caused dozens of injuries,’ a security source said.

An AFP correspondent who reached the scene of the blast the quickest said every shop in the Hamra commercial district had sustained damage. He said that entire shopfronts had been wrecked and blown away. Many shops had their windows shattered and many cars reduced to a rubble.

Injured people were walking in the street, while outside the Clemenceau Medical Centre, dozens of wounded people, many covered in blood, were rushing to be admitted to the centre, including children.