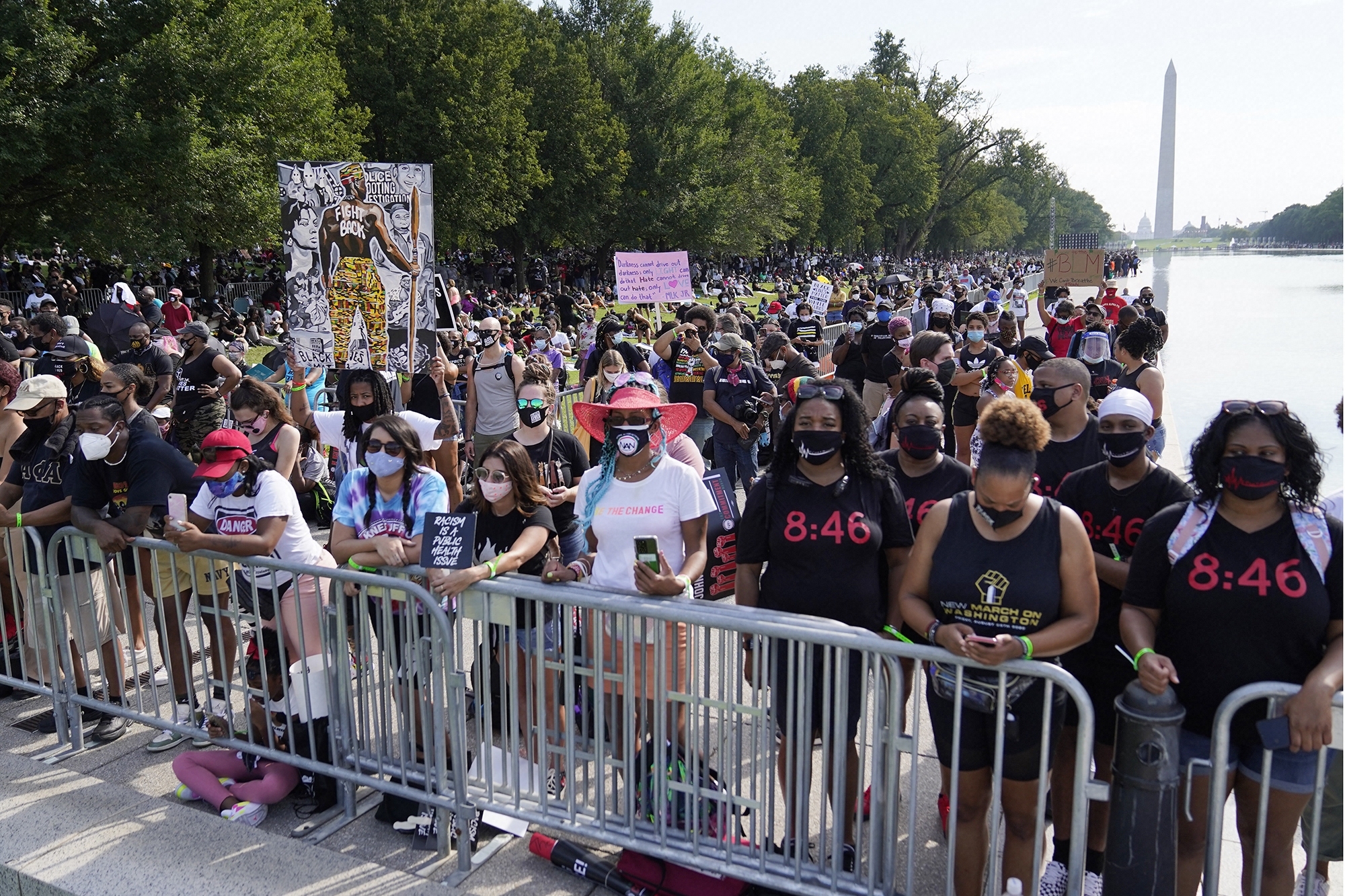 Washington: Thousands of people took to the streets of Washington D.C. to protest against police brutality and racism in the biggest gathering to take place in the US capital since the COVID-19 pandemic hit the country earlier this year.

A series of speakers addressed the protesters Friday from the steps of the Lincoln Memorial, marking the 57th anniversary of American civil rights icon Martin Luther King Jr.’s famous ‘I Have a Dream’ speech in the 1963 March on Washington, reports Xinhua news agency.

“We’re marching to overcome what my father called the triple evils of poverty, racism, and violence,” Martin Luther King III said in his remarks, adding that those ‘evils’ have exacerbated four major challenges – the coronavirus pandemic, unemployment, police brutality and gun violence, and voting rights – that currently face the US.

The event, dubbed the “Commitment March: Get Your Knee Off Our Necks”, came in the wake of the shooting of Jacob Blake, a 29-year-old black man, in Wisconsin on August 23 and the killing of George Floyd, an unarmed African-American man in Minneapolis on May 25, both in the hands of police.

The killing of Floyd, 46, who died after a white police officer kneeled on his neck for nearly nine minutes, triggered protests and social unrest across the US.

Public anger was reignited after Blake was shot seven times by a white police officer in Kenosha city, leading to consecutive days of protests and violence.

While addressing the crowd, Jacob Blake Sr., said: “I truly did not want to come see you all here today for these reasons… We’re not taking it anymore, I ask everyone to stand up. No justice, no peace.”

Families of other victims of police violence – Rayshard Brooks, Ahmaud Arbery, Trayvon Martin, and Eric Garner – were also at the Lincoln Memorial.

While Democrats were renewing calls for racial justice, President Donald Trump has sought to highlight his “law and order” message, a major theme of his re-election bid.

“Success: Since the National Guard moved into Kenosha, Wisconsin, two days ago, there has been NO FURTHER VIOLENCE, not even a small problem,” Trump tweeted Friday.

“When legally asked by local authorities, the Federal Government will act and quickly succeed.”

“As we mark the 57th anniversary of the March on Washington and Dr. Martin Luther King Jr.’s ‘I Have a Dream’ speech, we must continue the hard work of perfecting our union,” he tweeted.

“It’s up to all of us to carry on the march toward equality, liberty, and justice for all.”

Most of the attendees were wearing masks but the limited space made it difficult for them to keep social distance.