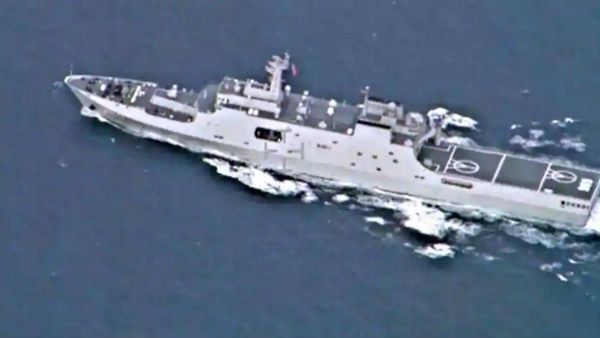 The Type-054 class is equipped with the latest surface, sub-surface, anti-air weapons, combat management system and sensors. It will be one of the technologically advanced surface platforms of the Pakistan Navy fleet, the report said.

Pakistan signed a contract with the China Shipbuilding Trading Company Ltd. (CSTC) for the delivery of two Type-054 A/P frigates in 2017. Last year, the Chinese official media reported that under a major arms deal between the two all-weather allies, China would build four advanced frigates for Pakistan Navy. The terms of the deal and the price of the ships were not revealed.

The launching of the ship coincided with the 2nd strategic dialogue between Foreign Minister of China Wang Yi and his Pakistani counterpart Shah Mahmood Qureshi. It was held at the Chinese holiday resort of Hainan, August 21.

Meanwhile Qureshi said Monday in Islamabad that China and Pakistan were strategic partners. He said the cooperative relationship between Pakistan and China was an answer to objections regarding the ambitious USD 60 billion China-Pakistan Economic Corridor (CPEC).

Qureshi said Pakistan and China were pursuing the project and its pace of implementation would increase and it would benefit the entire region.

The CPEC will connect Gwadar Port in Balochistan with China’s Xinjiang province. It is the flagship project of China’s ambitious multi-billion-dollar Belt and Road Initiative (BRI).

The CPEC is a collection of infrastructure and other projects under construction throughout Pakistan since 2013. Originally valued at USD 46 billion, the projects were worth USD 62 billion as of 2017. India has protested to China over the CPEC as it is being laid through Pakistan-occupied Kashmir.