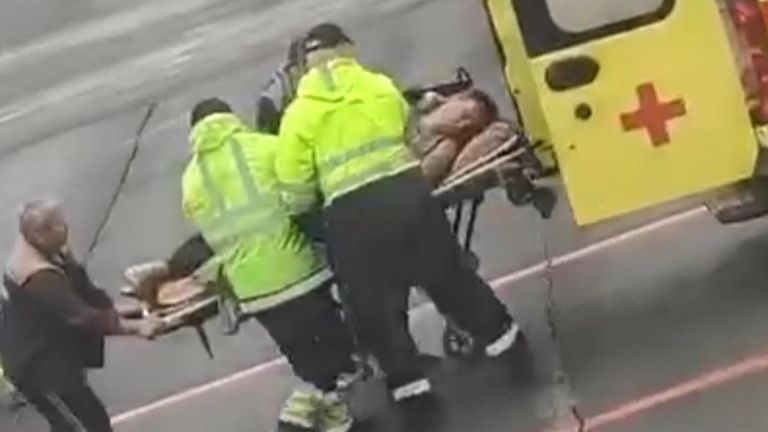 Moscow: Doctors in the Siberian city of Omsk refused to authorize the transfer of Russian opposition politician Alexei Navalny to a German hospital, his spokeswoman said Friday.

Navalny remains in a coma in intensive care after a suspected poisoning his allies link to his political activity.

“The chief doctor said that Navalny is non-transportable. (His) condition is unstable. Family’s decision to transfer him is not enough,” Navalny spokeswoman Kira Yarmysh tweeted. Omsk is about 4,200 kilometers (2,500 miles) east of Berlin, roughly a six-hour flight.

The 44-year-old Navalny fell ill on a flight back to Moscow from the Siberian city of Tomsk Thursday and was taken to a hospital after the plane made an emergency landing in Omsk. His team says a plane with all the necessary equipment is ready to take Navalny to a German clinic.

Navalny’s ally Ivan Zhdanov said Friday that police found “a very dangerous substance” in Navalny’s system, but officials refuse to disclose which substance it is.

Yarmysh also said in her tweet that “the ban on transferring Navalny is needed to stall and wait until the poison in his body can no longer be traced.

Yet every hour of stalling creates a threat to his life.” Like many other opposition politicians in Russia, Navalny has been frequently detained by law enforcement and harassed by pro-Kremlin groups. In 2017, he was attacked by several men who threw antiseptic in his face, damaging an eye.

Last year, Navalny was rushed to a hospital from prison, where he was serving a sentence following an administrative arrest, with what his team said was suspected poisoning. Doctors said he had a severe allergic attack and discharged him back to prison the following day.

Navalny’s Foundation for Fighting Corruption has been exposing graft among government officials, including some at the highest level. Last month, he had to shut the foundation after a financially devastating lawsuit from Yevgeny Prigozhin, a businessman with close ties to the Kremlin.

The most prominent member of Russia’s opposition, Navalny campaigned to challenge President Vladimir Putin in the 2018 presidential election, but was barred from running.

He set up campaign offices across Russia and has been promoting opposition candidates in regional elections, challenging members of Russia’s ruling party, United Russia.

One of his associates in Khabarovsk, a city in Russia’s Far East that has been engulfed in mass protests against the arrest of the region’s governor, was detained last week after calling for a strike at a rally.